Another Huge UFO spotted draining solar power from the Sun 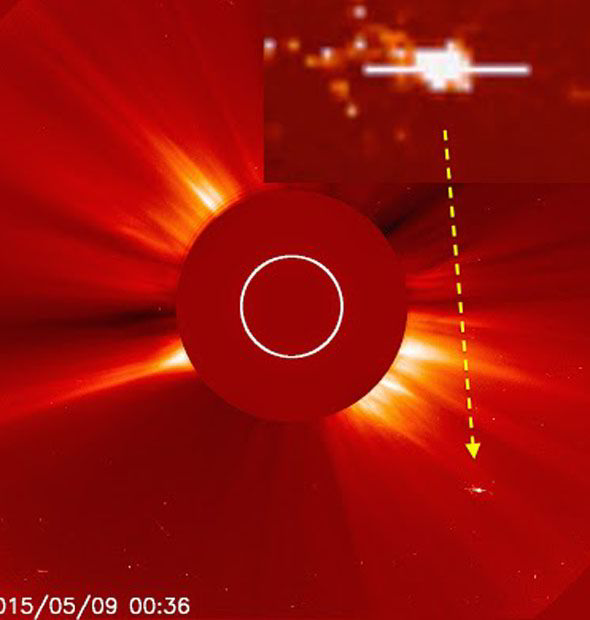 Another Huge UFO spotted draining solar power from the Sun – This incredible theory comes from many longstanding ‘UFO researchers’ mostly on online forums, following claims three spacecrafts orbiting the Sun can be seen in recently re-released images of a huge solar flare. Even Astronomers are clueless as to what these ‘larger than earth’ type objects by the sun are! (NASA just call them flares etc!?)

The very latest UFO sighting of an apparent UFO next to the Sun, was posted to YouTube by a prolific researcher with the username Streetcap1. Please see the intriguing video below:

The video was then examined by other prominent researchers, one of them being a Gentleman called Scott C Waring. He posted:

“Look at the right angles on the ship that looks like a giant crystal tower in space. Its beautiful. You can even make out the lines along its edges. I count 17 right angles on it.

“Remember this is a photo taken by a SOHO [Solar and Heliospheric Observatory] satellite whose soul[sic] purpose is to photograph our sun. These images are very clear and made with best tech NASA has to offer. The second ship looks equal in size, but its centre is thinner and less obvious.”

Mr Waring and many other leading UFO researchers have considered what super UFOs may be doing so close to the Sun and found there could be only two explanations, both just as intriguing/daunting as one another!

“One, aliens are meeting at or in our Sun to convene a United Worlds kind of meeting,” he added.

The second more darker theory is:

Recently there have been several incredible looking ‘UFOs’ spotted very close to the Sun as more and more UFO Believers and conspiracy theorists pour over the array of footage – ALL made publicly available by NASA!

Only last month, an interesting video claiming to show a UFO by our solar system’s star, said to bear a resemblance to Ancient Egyptian hieroglyphic patterns, also appeared online. Could it be that the elders here on earth had seen these Alien ships before and telling us their story about them from the past!? Or perhaps Aliens left these messages for us…

However, sceptics have been quick to point out the sightings always seem to coincide with a solar flare, and that any craft getting so close to the Sun would be obliterated by the heat.

A solar flare occurs when magnetic energy built up in the Sun’s atmosphere is suddenly released, emitting radiation across the entire electromagnetic spectrum, from radio waves to X-rays and gamma rays.

One critic argued the below:

“These so-called UFOs are the same colour as the flares so could they not just be bits of the flare being hurled into space? There are lots of other dots and specs all around of the same colour.

“You can’t just seize on every shape in these pictures that it MUST be an alien space craft and then come up with theories that they are sucking the Sun of energy.

“And where in hell would these planet-sized motherships be when not refuelling at the solar service station?”

Earth sized UFO’s have been seen for a very long while now! Please see an interesting video below about these surreal objects being seen next to the Sun:

UFO’s have been seen next to the Sun for quite a good few years now, and STILL nobody is any the wiser as to what these HUGE earth sized objects are!

I know a lot of critics (that includes NASA) conclude that these objects are nothing but flares on the screen and not Aliens crafts refuelling off the sun! But isn’t it a bit of a coincidence that whenever these crafts are seen there is suddenly not long after a huge Solar storm, as if something has interrupted the Sun!?

Plus these unusual crafts all have the appearance of looking like some kind of a ‘craft’ with wings and an aerodynamic type design….U.I.P can obviously NOT confirm that these objects are huge alien crafts, but what we can tell you is this, NOBODY has confirmed exactly what these images are….and NASA has not so long ago confirmed that these is portals between the sun – perhaps the Aliens use the stars as a way to manoeuvre their way through the Universe!

Critics will also say “well no craft can get that close to the sun!!!” Well guess what, Humans are still dependant on fossilised fuels we don’t have a clue what it comes to the Secrets and wonders of the Universe!!