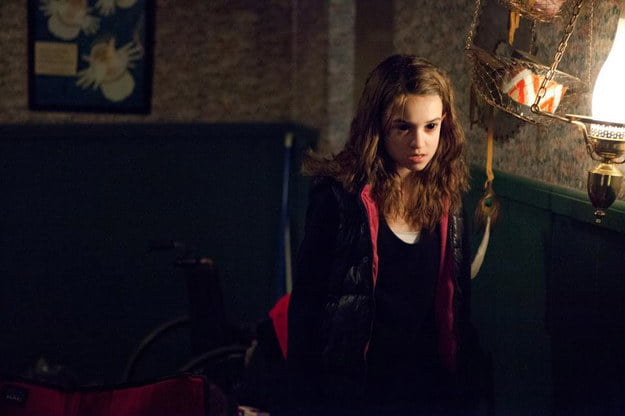 Black Eyed Kids – A few years ago, there had been quite a bit of discussion about “black-eyed kids.” We had the opportunity to listen into a Darkness on the Edge of Town radio broadcast featuring renowned demonologists, John Zaffis and Andrew Calder, discussing their thoughts concerning this phenomenon. A few articles and stories about black-eyed kids also came across our desks and caught our eye. According to those who are talking about strange encounters with odd children or teenagers who have darkened eyes, reports have been escalating in the United States over the past decade or so. That’s not to say that stories of black-eyed kids didn’t exist before this, but now, frightening reports are beginning to become more commonplace. Let’s take a closer look at these apparently scary children to offer some conjecture as to what may be taking place.

What Do Black-Eyed Kids Look Like?
Let us first consider the descriptions of black-eyed kids. They are often described as teen-aged, gaunt, pale, and having eyeballs that are jet black, most often with no whites in their eyes at all. Younger kids with a similare appearance have been reported, though, too. You might think of these ghosts as being a little “grungy” in appearance. Black-eyed kids have been seen in groups, maybe even playing with other kids, then disappearing as quickly as they arrived; or these mysterious children may be seen all alone, head down, and well, sort of creepy. Some eye-witnesses (no pun intended) have also noticed a foul odor accompanying these mysterious ghost youths.

Kids With Black Eyeballs: What’s the Big Deal?
These kids look a bit out of sorts. “So what,” you say. What makes black-eyed kids of major interest in the paranormal genre is that many of them seem to want something from those who see them. It may be a drink of water, a ride home, use of a bathroom or entrance into a home. Black-eyed kids are said to ask permission, looking for an invitation…to what, however, remains only speculation at this point. Most black-eyed kids never make it beyond their request due to the sudden fear that rises inside the people who have seen and heard them speak. Seeming very catatonic, these children or teens are persistent in their request that just doesn’t seem right. Something seems awry. People who have encountered black-eyed children, face to face, commonly believe that if they had acquiesced to the ghosts’ requests, none of their lives would likely have ever been the same. Fear consumed them to the point of shutting doors or even running away for safety’s sake. And so, the mystery deepens.

The “Demonologists” Weigh on Black-Eyed Child Ghosts
Andrew Calder and John Zaffis expressed the idea on radio that seeking permission from another is the hallmark of demonic activity. In other words, for people who believe in Satan, devils and the like, these black-eyed kids must either be demons masquerading as children or actual kids possessed by demons. They also mentioned that some black-eyed kids are seen with deformities which can be the sign of the demonic, something inhuman, altering its appearance in order to fool the unwise. Other ideas mentioned on the radio program included the possibility of alien visitors appearing in human form – the eyes being similar to descriptions found within alien abduction cases.

More Thoughts on Black-Eyed Children
We must admit that encountering youth with sunken, dark eyes and foul odor who ask for something of a person could be quite frightening. However, we would like to look at this a bit differently and not from a place of fear. What if people who had encountered these ghosts found something different had they attempted to help these kids?

First of all, with all the ghost movies that our culture produces, we know you have seen kids with black eyes before on the silver screen. We have, too. Have Hollywood films such as The Grudge and The Ring produced frightening images of children that haven’t left the psyche of people within our society? We do not know, but we have to ask that question first. Secondly, is it possible that kids today still pull pranks? Certainly, but out of respect for those who know that what they saw was real, let’s move to some other possible paranormal explanations for black-eyed kid encounters.

Could black-eyed kids simply be the ghosts of our country’s youth? All we have to do is look back to tragedies such as Columbine to know that a teenage mind-set capable of nefarious behavior is possible. Several years ago, near where we are based, a ten year old child shot and killed his mother. What might the ghosts of such kids behave like? What might they look like? Is it possible that, perhaps, their inner condition – let’s call it a corrupted mental state, might be capable of manifesting an external, just as frightening, altered appearance? Could the way we look after we die be based upon our frame of mind if we remain behind as ghosts?

Let’s assume that black-eyed kids are just that: kids with black eyes and not ghosts. Looking at Calder’s and Zaffis’ idea of possession, but instead of demons, what if the child or teen had a ghost attachment strong enough to influence behavior or even alter their appearance. We might think of this as being “ghost possession” but to a greater degree. Interestingly, the idea of being influenced or possessed by ghosts goes back thousands of years to Old Testament times (think mystical Judaism and ghosts), but that’s another story.

We know this: Until we have someone brave enough to confront a black-eyed kid in order to determine what is taking place, these spooky youngsters shall likely remain a mystery to us all.