Crackdown on witches linked to ‘spells of good weather’ 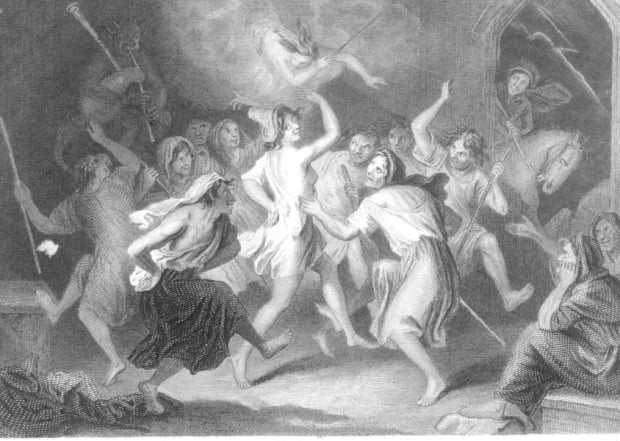 Crackdown on witches linked to ‘spells of good weather’ – CRACKDOWNS on Scottish witches were linked to spells of good weather, according to a mathematical formula unveiled by an economics expert. Dr Cornelius Christian, who earned his PhD at Oxford University, says good weather in 16th and 17th century Scotland helped create bumper crops for farmers – and extra taxes with which to prosecute witches.

He has devised a formula which proves a direct link between variations in the average temperature and the extent of witch-hunting north of the border.

Dr Christian’s research reveals that in most years there were few, if any, witch trials. But sunny weather in the late 1640s is linked to a purge in which more than 60 witches went to “trial”.

A similar spell of unusually good weather in the second half of the 1660s is directly linked to the trials of around 110 Scottish witches.

Witch hunts in Scotland during the period were particularly fierce after King James VI, in 1590, became personally involved in the North Berwick witch trials, claiming he had been their target for assassination at sea.

He writes: “Scottish law, which made witchcraft a secular crime in 1563, de facto required local elites to commit resources to trying witches. When these resources were more ample, witchcraft prosecutions increased.

“Consistent with this, and given that Scotland was an agricultural economy, I find that favourable (warmer) temperatures predict more trials.”

His research shows specifically that warmer temperatures increased the yield of certain crops – such as herring and wool – which elites taxed highly.

Trialling a witch was an expensive process at the time, with the average cost of incarcerating a witch at Aberdeen £20 – the equivalent of 120 days’ work for a labourer.

A large majority of the trials resulted in execution – usually by strangling and then burning the witch, but occasionally by horrific torture and stoning.

The probability is related to the national temperature “shock” – whether there has been a change in the average temperature over the previous years – as well as the “shock” in that county and year, plus any estimated errors.

His graphs show that prolonged trend for warmer weather in Edinburgh between 1630 and 1680 resulted in four dramatic spikes in the number of witch trials.

The academic’s study has found that Scottish witch-hunting practices went dramatically against the pattern for Europe – where bad weather was often scapegoated on witches.

Dr Christian – now teaching at St Francis Xavier University in Nova Scotia, Canada – said: “As to why bad weather made witchcraft trials increase elsewhere in Europe, authors like Emily Oster claim that bad weather leads to bad economic conditions, which leads to scapegoating and violence in the form of witch trials.

“Compared to the rest of the world at the time, Scottish witchcraft trials were very centralized and heavily institutionalized – it cost a considerable amount of money to run a trial, and so when there was more money available, trials increase.

He explained: “I decided to do this research because, quite frankly, it is fascinating, and Scottish witchcraft data is among the best witchcraft data we have, thanks to the work of Professor Julian Goodare and his colleagues at the University of Edinburgh. It would be a shame not to analyze it.”

In 2012 the villagers of Pittenweem in Fife campaigned to build the country’s first monument to the 18 witches who were killed in the picturesque village during the 18th century.

During the witch trials at Pittenweem, sixteen of the accused were burnt at the stake, and one died during torture.