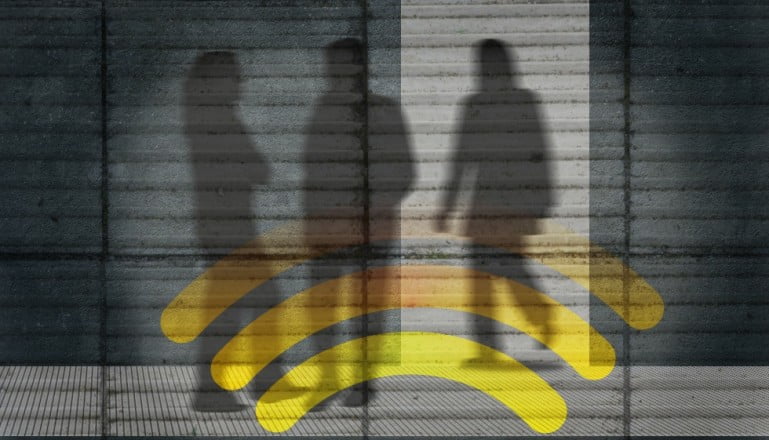 New WiFi Tracking System Counts People – Even Without A Connected Device – Many scientists have issued health warnings about the near-ubiquitous presence of WiFi in our homes and in public.

Now there might be a new concern on the horizon – public WiFi signals that can identify and track groups of individuals, even if they are not holding a personal connected device.

As we have come to learn, one of the hallmarks of technology is dual- or multi-use capability. It is for this reason that we are softened up with all of the benefits, before being introduced to the darker side.

Researchers continue to pursue invisible, pervasive ways to track human beings. Below is a chronicle of how WiFi signals are being used in creative new ways to ensure that whether or not you have opted out of the latest gadgetry, you still will be caught in an ever-widening net of the latest surveillance tech.

A little more than two years ago, the first enhancement of Wi-Fi was labeled WiTrack. It marked an improvement over a discovery by MIT researchers a few months previous that they had called Wi-Vi. At the time, researchers were able to use dual signals to detect the general location of moving objects behind walls, but not an exact image.

WiTrack operates by tracking specialized radio signals reflected off a person’s body to pinpoint location and movement. The system uses multiple antennas: one for transmitting signals and three for receiving. The system then builds a geometric model of the user’s location by transmitting signals between the antennas and using the reflections off a person’s body to estimate the distance between the antennas and the user. WiTrack is able to locate motion with significantly increased accuracy, as opposed to tracking devices that rely on wireless signals, according to Adib.

“Because of the limited bandwidth, you cannot get very high location accuracy using WiFi signals,” Adib says. “WiTrack transmits a very low-power radio signal, 100 times smaller than WiFi and 1,000 times smaller than what your cell phone can transmit. But the signal is structured in a particular way to measure the time from when the signal was transmitted until the reflections come back. WiTrack has a geometric model that maps reflection delays to the exact location of the person. The model can also eliminate reflections off walls and furniture to allow us to focus on tracking human motion.”

Here is a video demonstration of how this operates:

As if on cue, we are presented with the enormous benefits of this low-cost technology, while being given none of the potential negatives. In the video, we see the convenience element that would fit into the various applications of smart homes and the Internet of Things. Secondly are video games, which would take the somewhat cumbersome Wii to entirely new levels. And leave it to MIT to pimp the two most military-oriented games on the market that would benefit:

Imagine playing a video game like Call of Duty or Battlefield and having the ability to lead your virtual army unit while moving freely throughout your house.

Yes, imagine further acclimating America’s youth to become even more involved in the realism that has become violent gaming based on military campaigns, but I digress….

For the real sales pitch, we have to look at disaster relief and personal safety, which is precisely what the rollout of the microwave device cited above set out to highlight.

Here is what was said about Wi-Vi:

Researchers think the Wi-Vi system could also be used to find survivors in destroyed buildings or count and track criminals. Compared to previous military-oriented tracking systems, Wi-Vi is cheap, compact and lightweight, which makes it practical for consumer uses such as personal safety. Researchers now hope to improve the technology so it can work with denser walls over longer ranges. (emphasis added)

MIT later announced that they had “perfected” a system which can track multiple people through walls, as well as breathing and heart rate, to 99% accuracy.

This new system was called WiZ,

Researchers at the Computer Science and Artificial Intelligence Laboratory transmitted a low-power wireless signal through a wall and measured how long it took the signals to bounce back. Changes in the reflected signals allowed the team to measure movement, or even minute chest movements.

Based on a person’s chest rising and falling, the CSAIL group can determine their heart rate with 99 percent accuracy. The system can track up to four people at a time.

The first application touted, naturally, is to monitor your baby’s vital signs:

In the following video we begin to see how easily this stealth monitoring system could be set up for surveillance:

Website, Extreme Tech, while being “truly excited” about these developments, correctly summarized where they expected this to lead.

Perhaps most significantly, though, with the world moving towards wearable computers and ubiquitous sensor networks, WiZ could play a role in tracking your movement and vital signs without having to wear a Fitbit or smartwatch. It’s quite easy to imaginea wide-scale radio-based sensor network that tracks the movements of everyone through a given area — and then using some kind of beacon system (say, if your smartphone broadcast your identity) that sensor data could be correlated to each person. It would be equal parts great news for people wanting to keep track of their health and activity levels, and modern-day governments that just love to surveil their populace.

The move toward “ubiquitous sensor networks” without having to wear any pesky devices is indeed being perfected. And, once again, we can see a multi-use approach that leans more heavily toward future tracking and social management than it does its oft-touted search-and-rescue pitch.

Researchers in UC Santa Barbara professor Yasamin Mostofi’s lab are proving that wireless signals can do more than provide Internet access. They have demonstrated that a WiFi signal can be used to count the number of people in a given space,leading to diverse applications, from energy efficiency to search-and-rescue.

“Our approach can estimate the number of people walking in an area, based on only the received power measurements of a WiFi link,” said Mostofi, a professor of electrical and computer engineering. This approach does not require people to carry WiFi-enabled telecommunications devices for them to be counted, Mostofi emphasized.

To accomplish this feat of people-counting, the researchers put two WiFi cards at opposite ends of a target area, a roughly 70-square-meter space. Using only the received power measurements of the link between the two cards, their approach can estimate the number of people walking in that area. So far, they have successfully tested with up to and including nine people in both indoor and outdoor settings.

With the near-ubiquity of WiFi in many settings, the researchers’ findings have the potential for many diverse applications. For instance, the ability to estimate the number of people in a given space could be used in smart homes and buildings, so air conditioning and heating could be adjusted according to the level of occupancy. “Stores can benefit from counting the number of shoppers for better business planning,” noted Mostofi.

Previous work in the research lab involved imaging stationary objects/humans through walls with WiFi signals, and Mostofi plans to eventually bring the two projects together in the future. (emphasis added)

You can see what this merger might look like (integrated with robots of course), as illustrated in the following video:

The electronic tracking and Internet surveillance that we all have been enduring at the hands of the NSA and their corporate partners pales in comparison to the real-world, real-time tracking that seems to be on the horizon beyond the virtual matrix.

As tech site GIGAOM opined with tongue in cheek to introduce one of their previous articles on the topic: This technology will “ruin hide and seek forever.”