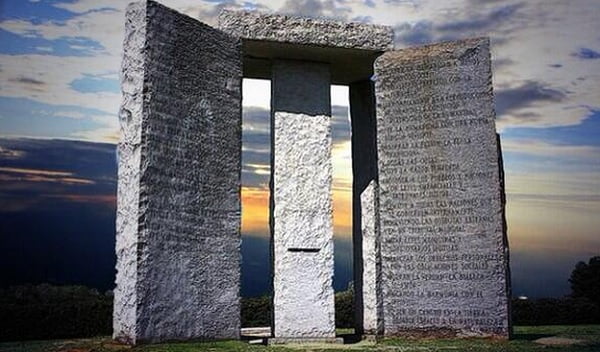 Occultists Worship Numbers – This Scripture captures the entire essence of what occultists have been doing for almost 5,000 years. Today’s New Age adherents, who pride themselves so greatly on their sophistication and “spiritual knowledge” worship all sorts of created objects rather than God.

Occultists place much faith in the inherent power of numbers. No plan of action can be carried out without first determining two things:

Is the timing of this plan of action in accordance with the astrological lineup of the stars, moons, and planets?

Is the timing of this plan of action in accordance with the numbers it will produce? This process is “Divination” and is specifically prohibited by God. (Deut 18:10-11)

Once you understand how occultists think and calculate, you will be able to see occultism in world events. This effort to determine the correct time for an action is carried out to precise days and times. A good example is the suicide of Adolf Hitler. Hitler chose the date, April 30, 1945, because it was the first day of the Pagan Spring Holy Days. He chose 3:30p.m. because, according to occult doctrine, this combination of three’s presented to him the most favorable time to depart this life and reenter the reincarnation cycle. Note the triple 3’s present here, April 30 as the first three, 3 o’clock in the afternoon as the second three, and 30 minutes past the hour is the final three. Hitler was engaging in typical occult behavior by arranging the timing of his death in a very precise, numeric manner. Hitler wanted to exit this life in such a proper time that he could come back quickly, as the real Anti-Christ.

1. Three (3) is the first sacred number, the first perfect number (Westcott, p. 41). Three represents the Pagan Trinity.” (Westcott, p. 37). It is represented geo-metrically in the triangle, and spiritually as the Third Eye Of Hinduism. Occultists will multiply and add three to other sacred numbers to create new numbers. However, they also group threes in two’s and threes, because they believe in the principle of “intensification”, i.e., that greater power is achieved when a sacred number is grouped. In the case of three, greater intensification is achieved when it is shown as 33, or 333. 333 + 333 equals 666. Occultists have used 333 as the hidden symbol by which they present the more offensive number 666. When the details of an event are so arranged as to contain certain sacred occult numbers or numeric combinations, this is literally an occult signature on the event. Mathematically, 666 can be created when three pairs of threes are added. Thus, (3+3) + (3+3) + (3+3) = 666. Now, eliminate the parentheses and the plus sign, and you have 33 space, 33 space, 33, representing the number 666.

2. Six (6) is the next sacred number, representing the number of the soul of man (Westcott, p. 66). This shows the omnipotent power of God, as this belief parallels Revelation 13:18, where God assigns 666 to man and to the beast. Six is also believed to be “all-sufficient”. This parallels

Biblical teaching, which states that man’s great sin is pride in himself.

3. Seven (7) is a sacred number. Van Buren calls 7 “one of the most sacred of all the numbers…the Invisible Centre, the Spirit of everything”. (p. 39) Since multiplication of seven creates an even more powerful sacred number, we should not be surprised that 3×7, or 21, is considered powerful .

Thus, when Adam Weishaupt formed the Masters of the Illuminati, he arranged the timing of the event by arranging the numbers in a manner which would add to powerful numbers. He chose May 1, because May, month #5, added to the first day, equals 6. Weishaupt chose 1776, because the four numbers of this year add up to 21 (1+7+7+6 = 21). Further, the number 6 + 21 = 27, another number of power, because it is formed by the multiplication of 3×9. This date was very carefully chosen by Weishaupt; he believed the greatest Plan is doomed to failure if it is not carried out in the most numerically advantageous time.

5. Eleven (11) is a sacred number. When eleven is multiplied by the perfect number 3, the number 33 is produced, a number of tremendous occult importance. In 1933, Adolf Hitler and President Franklin Roosevelt came to power. Both these men were committed to the establishment of the New World Order, and their actions impacted humanity greatly. It was also in 1933 that the First Humanist Manifesto was issued. Do you see how Satan manipulated world history to produce three New World Order events in 1933? Thus, a powerful 333 served as a framework for world events in that year.

6. Thirteen (13) is deemed sacred. It was also no accident that Hitler chose the year 1939 to begin World War II, because 39 is formed by the multiplication of 13×3. Thus, you can see how human history has been shaped by the occult belief in the power of numbers. We have provided much detail as to how history has been shaped by this belief in the power of numbers. You can get this information in our Cutting Edge Radio Program dated May 9, 1992, entitled, “33 33 33 = 666 New Age Numerology”.

An Occult signature to current events

President John F. Kennedy was assassinated on November 22, 1963, in a public square which had been home to a Masonic Lodge and which has an obelisk in its center. November is Month #11 and the day of the murder was the 22nd. Numbers 11 and 22 are sacred primary occult numbers.

President Ronald Reagan was nearly assassinated on March 30, 1981, at 3:30p.m. March is the third month (first 3), and 3:30p.m. provides the other two three’s (33), producing a 333. Reagan was not the New World Order candidate; George Bush was their candidate. Had Reagan been killed, Bush would have assumed the Presidency at the planned moment in history. As it was, Reagan’s policies continually turned to the center and then the left, until he was clearly enabling the New World Order to proceed full-speed ahead.

At the close of business on April 29, 1992, the Dow Jones Average closed at 3333!! Gold also closed at $337 an ounce. Therefore, at the opening bell on April 30, the Dow Jones Average began business at 3333 and gold began at $337 per ounce!! Do you see that we have three sets of 33’s here? Remember, the number, 666, is very often hidden within numbers 33 space, 33 space, 33. Occultists throughout the world would interpret this data as representing 666 as the world began to pass through the 66-day period,

An article in the Sun Chronicle on May 3, 1992, reported that the Stock Market was over-valued by 66%!! Events on this critical date abound in threes and sixes.

. “There are 66 days between April 30 and July 4 of every year. April 30-May 1 is the Satanic two-day celebration called Beltaine. In 1776, the United States of America issued her Declaration of Independence precisely 66 days after the beginning of Beltaine that year. Adam Weishaupt declared his Masters of the Illuminati on the second day of Beltaine. Thus, both the founding of the Satanic Masters of the Illuminati and the United States were centered around Beltaine.”