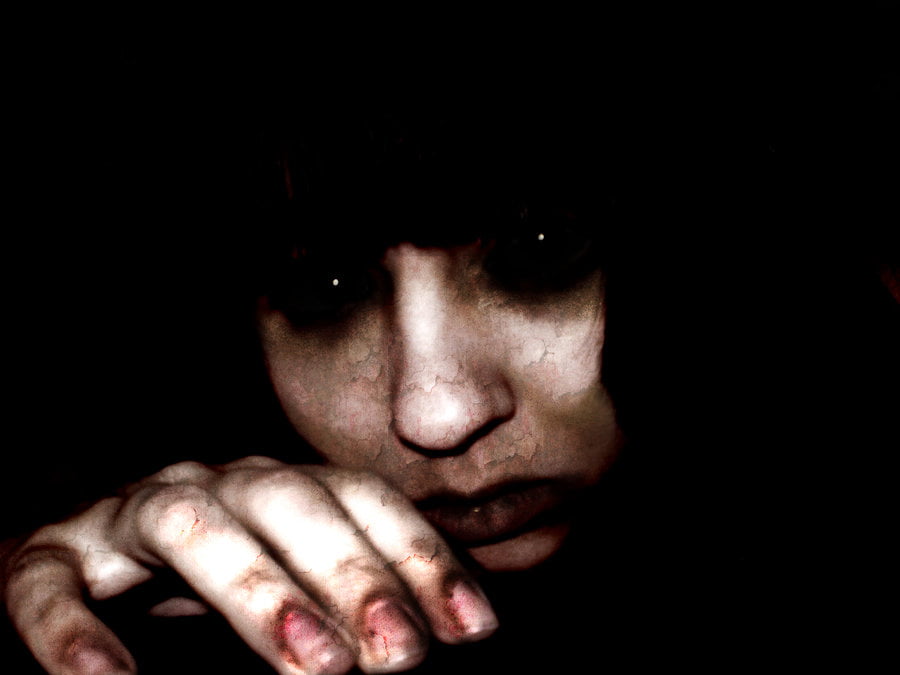 They’re Back! More Encounters With Black Eyed Kids – We recently published a report about the mysterious black eyed children sightings around the world by numerous witnesses, including an accomplished journalist. New stories about encounters with these supernatural creatures continue and we’ve become even more confident they’re a vampire-werewolf hybrid trained to secure food for their bloodsucking parent(s). To make things even more interesting, it’s possible information about the very first black eyed child sighting was shared a few weeks ago by British news sites.

Who Was the First Black Eyed Kids?

While impossible to conclusively state when the very first appearance of the black eyed children took place, a paranormal investigator named Lee Brickley is fairly certain he’s narrowed it down. Apparently, a girl with black eyes was first spotted in the early 1980s in Stratffordshire and her appearance, at that time, did capture the attention of various media sources worldwide.

However, this particular story had been lost until the same child reportedly made another appearance at Cannock Chase in Stratffordshire earlier this year. This prompted Brickley to begin an in-depth investigation of the entire area with the intention of finding conclusive evidence these elusive children actually exist.

The black eyed child in Stratffordshire, interestingly, does not employ the same tricks as other black eyed children to capture the attention of her prey. Rather, instead of knocking on people’s doors and asking to come in, she screams until someone tries to come to her rescue. Once sucked into the trap, the black eyed child approaches her would-be victims. Fortunately, the most recent witness of this supernatural occurrence was intelligent enough to quickly vacate the area before she and her daughter could be collected and taken to the black eyed child’s lair.

If our theory about the black eyed children is correct, it’s intriguing to consider the possible reason behind their appearance in the early 1980s. A look at the population of the world between 1950 and 1980 gives us some potential clues. After all, there were an estimated 2.5 billion people alive in 1950 but this number had shot up to an astounding 4.4 billion by 1980 – obviously a more plentiful source of food for cryptid community but also a much more different environment to navigate and still remain undetected.

New methods may have been necessary to sustain the equally expanding cryptid population and still remain out of the public eye. Increasing werewolf and vampire populations would have also made it more likely the two cryptid species actively interbred. When you think about it, it makes perfect sense for vampires and werewolves to breed offspring capable of luring food into carefully selected locations. Of course, it’s entirely possible these hybrid children existed long before the 80’s and were just recently put to ‘work’ but it seems unlikely since there are zero reports before then.

1. Home Visit – One woman who encountered two vampire-werewolf hybrid children visiting her home was first alerted to their presence by the wild barking of her usually docile dog. According to her report, one of the children was approximately 16 years old and the other appeared to be three or four. They were dressed in a similar style; their clothing was modern and popular. Just like many of the other black eyed children stories, the older child was wearing a hoodie and she asked the homeowner to let them in so they could use her telephone. The girl stated they did not intend to harm the home owner (first clue something was wrong) but these words were said in a harsh, cruel manner that was quite terrifying. Unsurprisingly, the woman didn’t open the door to let the children in and they eventually went away.

2. Bus Rider – Sometimes black eyed children appear outside of residential neighborhoods and attempt to gain access to people via their vehicles. In one especially disturbing encounter, an older black eyed individual was spotted on a city bus. Oddly, this hybrid appeared to be in his 20s and was wearing a suit. This is not what anyone typically expects when they think of black eyed children but it’s possible they age and eventually end up entering society in a more conventional way. However, the young man with black eyes was spotted chatting with a woman around his age after she got on the bus, so it ‘s just as possible black eyed children eventually transition into black eyed adults who utilize different methods of capturing people as food for others or perhaps themselves.

3. A Creepy Holiday Appearance – Last Halloween, an older woman who stated she unequivocally does not believe in ghosts found herself staring through the glass of her front door at two young black eyed children. If the kids had come to her door earlier in the evening, she would have casually opened it and handed them candy. Fortunately for her, the eight and 12-year-old black eyed kids didn’t make their presence known until after 10 p.m. at which time the home owner questioned their sudden appearance and became concerned. Additionally, her dog started freaking out when they approached the door and the canine ran upstairs whimpering when the children began to speak.

As usual, the black eyed kids started off with their cover story about needing to use the telephone. When the woman offered to make a phone call for them, the older girl changed the story a little bit by stating her younger brother also needed to use the restroom. The woman contemplated letting them in but quickly decided against it after she got a glimpse of their eyes. Although she is still a skeptic, the woman admitted to feeling afraid and asked the children through the door why they could not use their cellphone instead. This naturally led to a statement about their cell phone battery being dead but the woman was not convinced and made it clear that she would not be opening her front door. The children eventually walked away but they did stand in the street staring at the house for a while before wandering off.

4. A Child’s Experience – Another intriguing story took place in March 2008. According to the eyewitness, he was 12 at the time and sitting in a pickup truck waiting for his mother to get done at the hairdressers. He saw a young boy walking back and forth on the sidewalk for a few minutes before making the bad decision to make some noise. The sound naturally grabbed the attention of the black eyed child and he turned to look at the boy inside the truck. Instantly, the boy knew he’d made a mistake as soon as he saw the completely black eyes.

To make matters even worse, the black eyed child approached the vehicle, began knocking on the window and whispered “you must let me in.” The 12-year-old reacted quickly by locking the doors and ducking below the seat. It took approximately five minutes for the black eyed child to lose interest and walk away. This particular story has an unexpected twist because the boy’s mother was also approached by the black eyed child. Reportedly, the hybrid asked her to give him the keys to the pickup truck. Naturally, she refused, and the seemingly frustrated black eyed kid finally made the decision to completely vacate the area.

5. An Old Fashioned Encounter – A man was surprised to hear noises coming from multiple windows throughout his house at 2 a.m. in the morning. He initially jumped to the conclusion some of his neighbors were out partying late and didn’t realize their visitation would be an unwelcome intrusion at such a late hour. Instead, when he unlocked and opened his front door, he was shocked to see two young boys staring at him. The man was hit with a sudden and inexplicable feeling of dread – fighting the urge to vomit from the strong smell of mold which instantly overwhelmed his senses.

Shockingly, the youngest of the black eyed children made an extremely unusual request at this point. We are used to these creatures asking to use a telephone or a restroom in order to gain access to someone’s home but this is the first time anyone has reported a black eyed child asking to use…a telegraph. The situation became even weirder when the man realized the usual neighborhood noises had completely stopped. He no longer heard the humming of electricity or any nearby street sounds, seeming as if he’d stepped back in time – just momentarily.

After a brief pause, the man recovered enough to tell the young boys he didn’t have a telegraph service at his home. This answer obviously didn’t go over well and they persisted to bang on the windows and door for an extremely long time before finally giving up. Is this story evidence black eyed children can be traced back well before the early 1980’s? We might never know, but it does seem really odd for anyone to ask to use a telegraph during the year 2014.

As the legend spreads about these creatures, witnesses are reporting an ever increasing number of black eyed children encounters on an almost daily basis. Are these encounters becoming more prevalent because vampires and their furry companions are running low on easy to find meals or are these cryptid children merely more insistent today because more people are aware and are actually afraid of them? After all, vampires and werewolves were able to roam more freely half a century ago so this could quite simply be the right time for these hybrids to shine. Makes you wonder how many missing person reports every year are attributed to these black eyed children.